NOTE: New for 2021, directors apply directly for the prize. 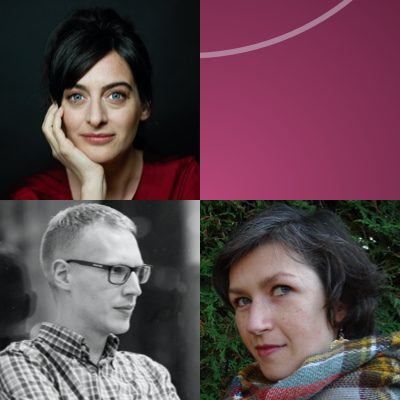 An enthusiast of both artistic collaborations and the meeting of disciplines, Alexia Bürger is a stage director and dramaturge. She works on performances and installations that combine fictional and documentary material. She recently directed 21, by Rachel Gratton (CTDA), Barbelés, by Annick Lefebvre (Théâtre National de la Colline, Paris / Théâtre de Quat’sous, Montréal), as well as her own play, Les Harding (CTDA / Théâtre de la Bordée / Théâtre Jean Duceppe), for which she received the CTDA public’s choice award and an award for best play (Montréal, 2018), handed out by the Association québécoise des critiques de théâtre.

Milena Buziak has headed the Voyageurs Immobiles, Cie de création, since 2009. There, she stages plays for adults and young audiences. Trained at Concordia University and the UQAM, she perfected her directing skills under Gervais Gaudreault, at Le Carrousel, compagnie de théâtre. She teaches acting and stage direction, namely at University of Ottawa. Her two latest productions, Traversée, by Estelle Savasta, and Le Cheval de bleu, by Marcel Cremer, both of which will be touring next season, are presented in French and Quebec Sign Language, and are therefore accessible to Deaf audiences.

Jonathan Seinen is a director, actor, playwright, theatre creator and producer who has worked primarily through Architect Theatre, lemonTree creations, Saga Collectif, and Boys in Chairs Collective, directing Black Boys, Access Me, and Iphigenia and the Furies (On Taurian Land), which was nominated for seven Dora Awards. He also directed Hamlet in a Calgary community hall and Deathwatch in a Toronto art gallery basement. As an actor, he has worked with Tarragon Theatre, Theatre Calgary, Citadel Theatre, and Studio 180 / Buddies in Bad Times. He is a graduate of the University of Alberta, National Theatre School, and Columbia University, where he directed Cabaret, Our Town and The Seagull.

On his death in 1989, distinguished theatre director John Hirsch left a bequest to the Canada Council for the Arts to encourage Canadian directors. Mr. Hirsch made an extraordinary contribution to theatre in Canada, most notably as founder of the Manitoba Theatre Centre, head of CBC television drama and artistic director of the Stratford Festival.

Updated guidelines will be posted 2 months prior to the deadline. Submit your application by email.