2019 marks the 50th anniversary of the coming into force of the Official Languages Act, which granted French and English official language status and equal standing in the Canadian government. The Canada Council is delighted to join its federal partners and stakeholders in celebrating this significant milestone.

Language as an agent of identity

Language is closely linked to a people’s culture—it is the lens through which we perceive the world and our relationships with others. Canada’s official languages, along with its cultural diversity and the unique role of First Nations, Inuit and Métis peoples, contribute to its strength as a country. Canada’s official bilingual identity, forged by a unique history, is today a source of cultural richness that inspires and is expressed by artists across the country. 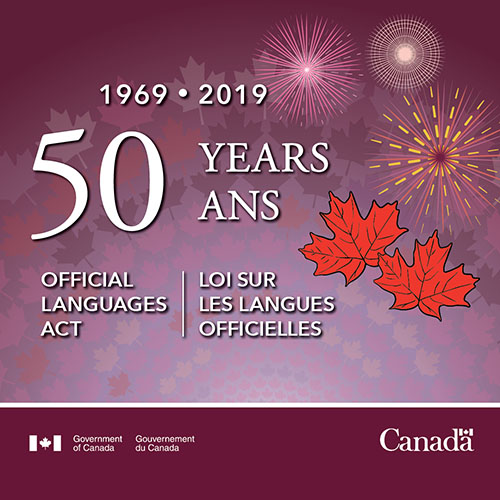 The Canada Council is a firm believer that Canada’s official languages greatly contribute to the diversity and richness of the arts in Canada. It works to ensure its activities make tangible, ongoing contributions to both linguistic duality and the development of Official Language Minority Community (OLMC) artists and arts organizations.

As the Canada Council recognizes the important role the arts play in promoting Canada’s linguistic duality and the artistic vitality of OLMCs, it has implemented a range of measures, including representation of OLMCs on peer assessment committees and dedicated strategic funds, such as the Market Access Strategy for Official Language Minority Communities (OLMC) Fund, which helps Canadian artists, arts professionals, artistic groups and arts organizations who self-identify as belonging to an OLMC reach new markets. More information is available in the Council’s Official Languages Policy.

In 2018, the Council signed the Collaboration Agreement for the Development of Arts and Culture in the Francophone Minority Communities of Canada 2018-2023, which supports the development and vitality of francophone artistic expression in Canada, in partnership with the Fédération culturelle canadienne‑française and other federal cultural institutions.

In honour of the 50th anniversary of the Act, the Canada Council is proud to shine a spotlight on artists who have contributed to Canada’s incredibly rich and diverse arts scene in both official languages. As Official Languages Champion for the Canada Council, I encourage you to visit our Spotlight page to read about some remarkable artists who embody Canada’s linguistic duality.