Reframing, Reclaiming, and Shaping our Future

Reframing, Reclaiming, and Shaping our Future

We are a month into the school season and we have history class on our minds after a summer of sesquicentennial milestones, confrontations, and reclamations. Art practices that play on how we create history can be used to reexamine the past in new ways. Art can subvert popular historical narratives, reframe and reclaim the past, and shape the future. The following New Chapter projects do just that.

Building materials are a reminder of colonial history in the North. Youth from Kinngait (Cape Dorset, Nunavut) explore the duality of those materials and reclaim them for art production in Towards Something New And Beautiful + Future Snowmachines In Kinngait. This ongoing project and installation by artist collective PA System in collaboration with Kinngait youth, consists of prints, videos, playdough snowmobiles, and figures cast in the material remains of a burned school. The project will conclude when the youth obtain new snowmobiles for ice fishing, from the funds raised through their production. See the installation now until December 10 at the Art Gallery of Ontario. 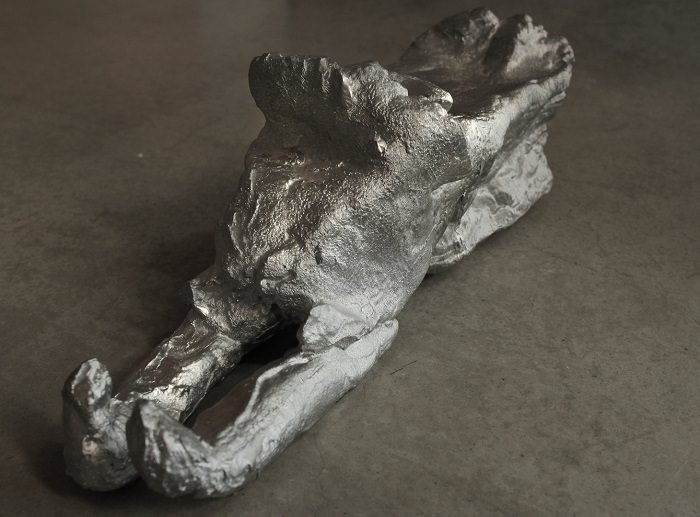 Snowmachine made of playdough and cast in aluminum, by youth collaborators Moe Kelly and David Pudlat 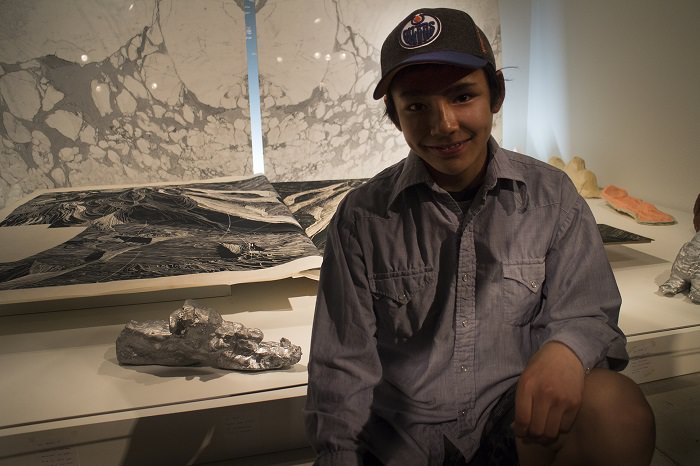 Lachaolasie Akesuk sits next to his sculpture on display at the opening of Towards Something New And Beautiful + Future Snowmachines In Kinngait. 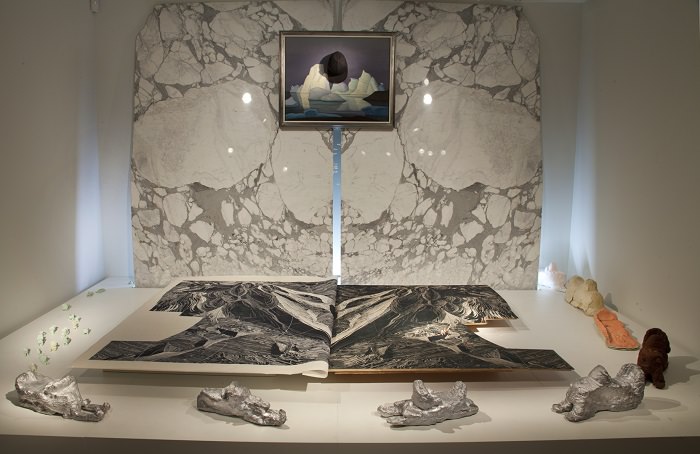 Part of installation at Towards Something New And Beautiful + Future Snowmachines In Kinngait. 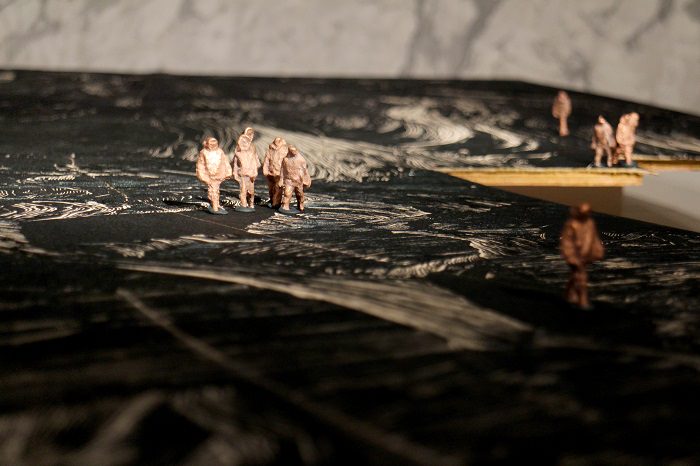 3D printed figures of Kinngait Youth cast in copper, installed at the AGO

In 1963 composer Robert Ashley created 4 scores of music for (in) famous figures in American history. His work explored the connections between music and the way history is formed. Now, thanks to Ociciwan Contemporary Art Collective, a 5th score has been created by Indigenous collective Postcommodity and composer Alex Waterman. In Memoriam… honours 3 Indigenous women from territory, now Alberta, at the turn of the century. The piece was performed this summer with Indigenous musicians from across Alberta, and continues to explore how and for whom we create memorial and legacy. 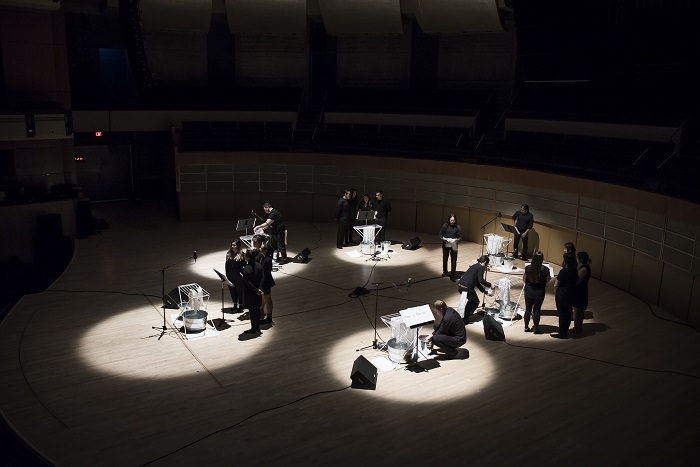 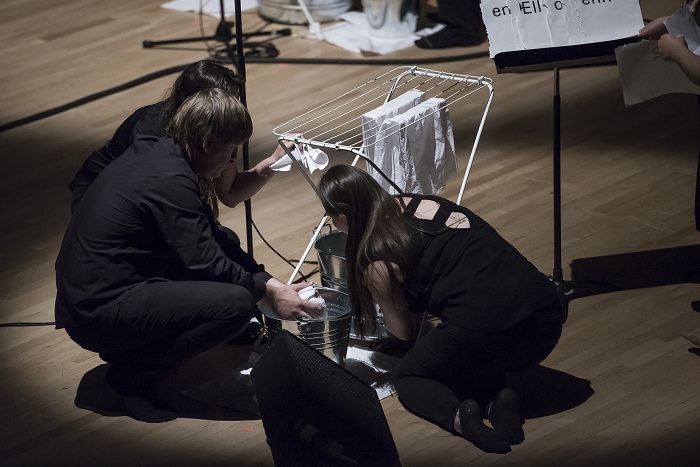 Indigenous activist Leonard Peltier was sentenced to life in prison in 1977, for the murder of two FBI agents during a conflict on the Pine Ridge Indian Reservation in South Dakota. His case has been the subject of much controversy, with Amnesty International calling his trial unfair. Artist Stan Douglas will reenact Peltier’s trial in Locus Standi, a 4-channel video installation using the method of Verbatim Theatre. The piece, which premiers in Vancouver this December, will call on audiences to reexamine the trial and will connect this story to local histories and broader social narratives of struggle.

After the death of Louis Riel, fellow Métis leader Gabriel Dumont fled Saskatchewan and was recruited into Buffalo Bill’s Wild West Show. Now, thanks to Nouveau Théâtre Expérimental, Dumont will have a show of his own. Gabriel Dumont's Wild West Show is a bold contemporary epic that shares the struggle of the Canadian Métis and makes known the story of Dumont and the Northwest Resistance of 1885. 10 authors from Métis, Aboriginal, French and English communities were brought together for the creation of this work. The show will premier this month in Ottawa this October, with additional performances scheduled for Montreal, Winnipeg, and Saskatoon. 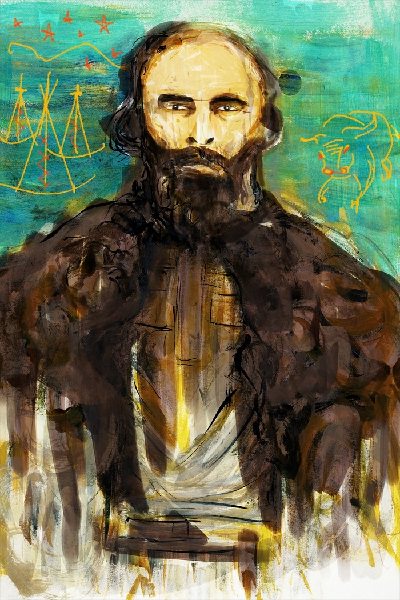 To summarize this art-inspired history lesson… Towards Something New And Beautiful + Future Snowmachines In Kinngait subverts colonial narratives and shares the experiences of Inuit communities, while In Memoriam… celebrates largely-forgotten figures and explores the ways in which we construct history. Locus Standi reenacts a controversial case, word for word, so that we can reconstruct the story of a man, still living, who cannot do it himself, while Gabriel Dumont's Wild West Show creates a new frame in which to view a historical figure and his resistance.

New Chapter is a one-time program created to mark the 150th anniversary of Confederation. Through this $35M program, the Canada Council is supporting 200+ exceptional projects that will leave a lasting legacy for communities across the country.