The opening ceremony: a well-kept secret… a chance to discover each other

The Canada Council has amped up its social media presence over the past 2 years. Now, more and more of us are sharing news and comments via these networks. We pass along our culture, in both the real and the virtual worlds, by word of mouth – or by ‘likes’ and ‘shares.’ This year, the Council, in association with Canadian Heritage, is shining more light on young artists who are breaking onto the international scene via the Francophone Games. Read blogs from some these talented young artists, such as Marie Beland, Stéphane Guertin and Supernaturalz. And thanks to Guillaume for reminding us (below) that Canada's Francophone artists are winning accolades around the world! 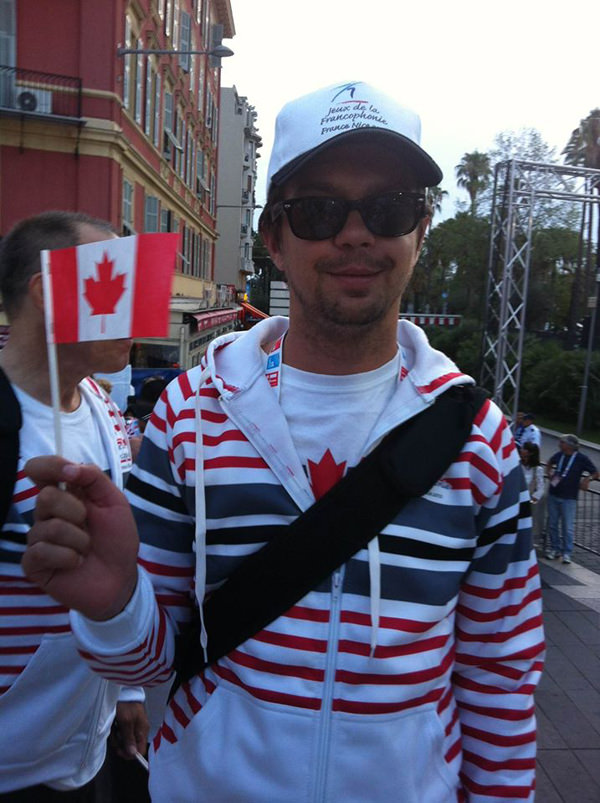 When I learned that my short story Les effets secondaires was selected to represent Canada in the 2013 Jeux de la Francophonie, I was thrilled. I had just graduated from the National Theatre School of Canada and felt that this would be a fabulous opportunity to be discovered overseas.

Proud and excited, I broke the big news to my friends.

That night I closed my eyes and imagined myself in front of a roaring crowd in the Olympic Stadium in London.

When I arrived in Nice, France, I donned my uniform with its Canadian colours in preparation for the opening ceremony.

In Place Massena, I waved my little Canadian flag to greet the modest crowd that had come to applaud the participants. Actually, not many people turned up to see us. And the décor seemed very humble in comparison to the Olympian extravagance I had imagined.

I walked across the stage and went to sit in the bleachers. I turned jokingly to a choreographer friend, “It’s a good thing we’re here, or there’d be no one at the ceremony!”

On the stage, countries continued to parade in, one after the other. Here, obviously, were France, Switzerland and Belgium – but Armenia ? Bulgaria? Vanuatu?? I knew nothing about the Games, it’s true – but I had no excuse for knowing so little about the Francophone world itself – all the nations that make up La Francophonie.

La Francophonie: never heard of it

I’ve often complained about the cultural isolation of Quebec. I used to say that, lost as we are in the middle of an Anglophone ocean, between English Canada and the United States, the Belle Province would benefit enormously if the Francophone world were more open to our productions, which would otherwise be restricted to a market of six million people.

In reality, though, I was looking at the problem from the wrong end. How could I expect the Francophone world to be interested in me when I’d never been interested in it?

In the evening, several of us participants would congregate down by the beach, looking out onto the Mediterranean. We would talk and drink wine until the wee hours of the morning. I was happy to listen to Cosmin Perta from Romania explain why he chose to write his Kafkaesque musings in French, to Edgar Kosma from Belgium describe his projects for graphic novels and a protean novel about the world of work, and Valérie Cachard from Lebanon telling how, every time she leaves her country, her father makes her promise not to come home if war breaks out …

It’s true that without the participants there wouldn’t have been anyone at all at the opening ceremony. It was just us. But perhaps the objective of these Games was not so much to give us a higher profile, as to give us a chance to discover each other.

I ended up winning the gold medal. And when I got home to Montréal, I couldn’t resist Googling myself. Not one media outlet had mentioned my triumph – and to be honest, I didn’t care one bit. Two and a half years have passed since then, and every time I go to Europe with one of my plays, I get back together with the friends I drank wine with on the Mediterranean coast, back in that unforgettable September.

Chair, Canada Council for the Arts