Imagine the opportunity to create a short film about a key figure in the visual or media arts, with the support of a local production centre – with full creative control over your work.

That was the assignment recently given to group of independent film directors. The result: Insightful, often inspiring, always creative video portraits of the 8 winners of the 2016 Governor General’s Visual and Media Arts Awards. 2016 marks the fourth year of this video project – a partnership between the Canada Council and the Independent Media Arts Alliance. 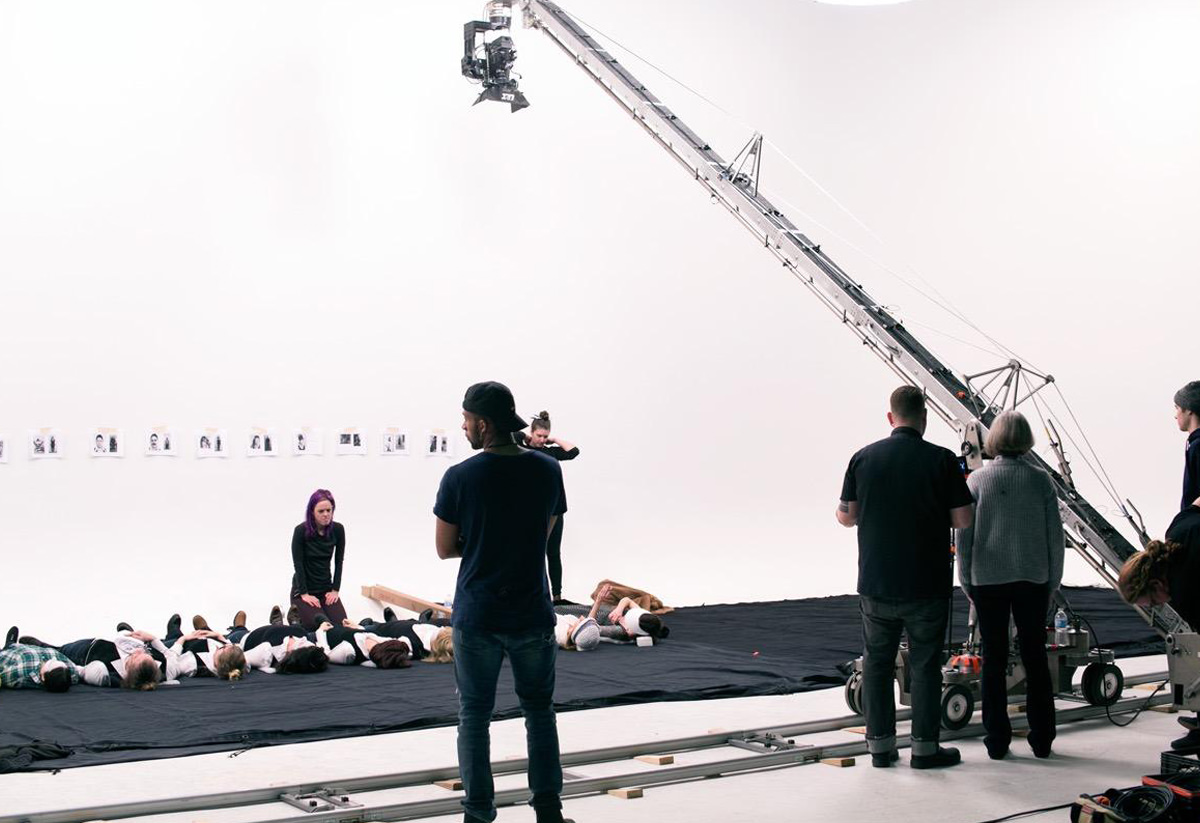 Behind the Lens: The Making of the Suzy Lake Video

What were some of the challenges of bringing together such a large “cast” and complicated shoot?

I could not be more grateful for the tireless efforts of our Production Manager Emma Wardle who was instrumental in organizing the many logistics needed to realize the project. Complicating the shoot was the fact that we had to fly the camera at least 18-feet high in order to achieve the required head-to-toe framing. Under the guidance of our Director of Photography Ryan A. Randall and Key Grip James Gordon, we used a 24-foot jib mounted on a dolly with 70-feet of track. This allowed us to achieve the film’s framing and left-to-right tracking movement across the scene of performers. A key element of the final soundtrack is the ambient sound of these labours; of the film shoot itself, recorded by Alex Williams.

Equally challenging was the faithful-as-possible recreation of the wardrobe, hair and makeup from Suzy’s past works. While Suzy provided some of the actual wardrobe and props from her more recent work, our team had to source much of the wardrobe, and in some cases fabricate entire pieces of clothing from scratch. On the day of the shoot, our team dressed a final total of 27 performers in full hair, makeup and wardrobe in only 3 hours. Special thanks to Andrea Vander-Kooij for leading the charge on the wardrobe and pulling double-duty as a performer. She’s the one wearing the handmade beanie.

In terms of casting, it’s a tall order to ask any individual to volunteer 10 hours of their day, especially if the request is to lay on a concrete floor for 4 hours in full makeup and wardrobe. While most performers knew or had worked with Suzy in the past, I'm still humbled by the fact that almost every individual that I approached (each a talented artist in their own right) agreed to participate. After working with Suzy, even for this short period of time, I quickly came to understand the motto echoed by performers throughout the shoot, “Anything for Suzy!"

Your film is like a documentation of a performance of the type Suzy Lake is known for. How did the two of you come to decide on this approach?

While I connected with all of Suzy’s work, it was her Reduced Performing series (c. 2008) that resonated with me the most and inspired my approach. For the series, Suzy used a large-scale flatbed scanner to capture life-size, head-to-toe images of herself. What struck me about the series was the subtle yet deep investigation of the nature of performance in relation to the documentary nature of photography. The series ended up inspiring the video portrait idea that I proposed to Suzy.

Referencing the Reduced Performing series, my approach was to restage as many of Suzy’s past works as possible in a single scene photographed in one continuous, uninterrupted shot. To restage and perform the past works that Suzy had performed throughout her career, it was important to me to cast local performance artists – specifically individuals who related to or were influenced by Suzy in some way. Placed side-by-side, I calculated that I could fit roughly 30 performers within a 3-minute single-take that scanned a 60-foot scene in a single tracking camera movement.

I wasn’t sure how to articulate the idea to Suzy at our first meeting, so I pitched it with a rough animated storyboard in tow. It took Suzy all but a minute to absorb the idea and say, “I love it, this is something I would do!” 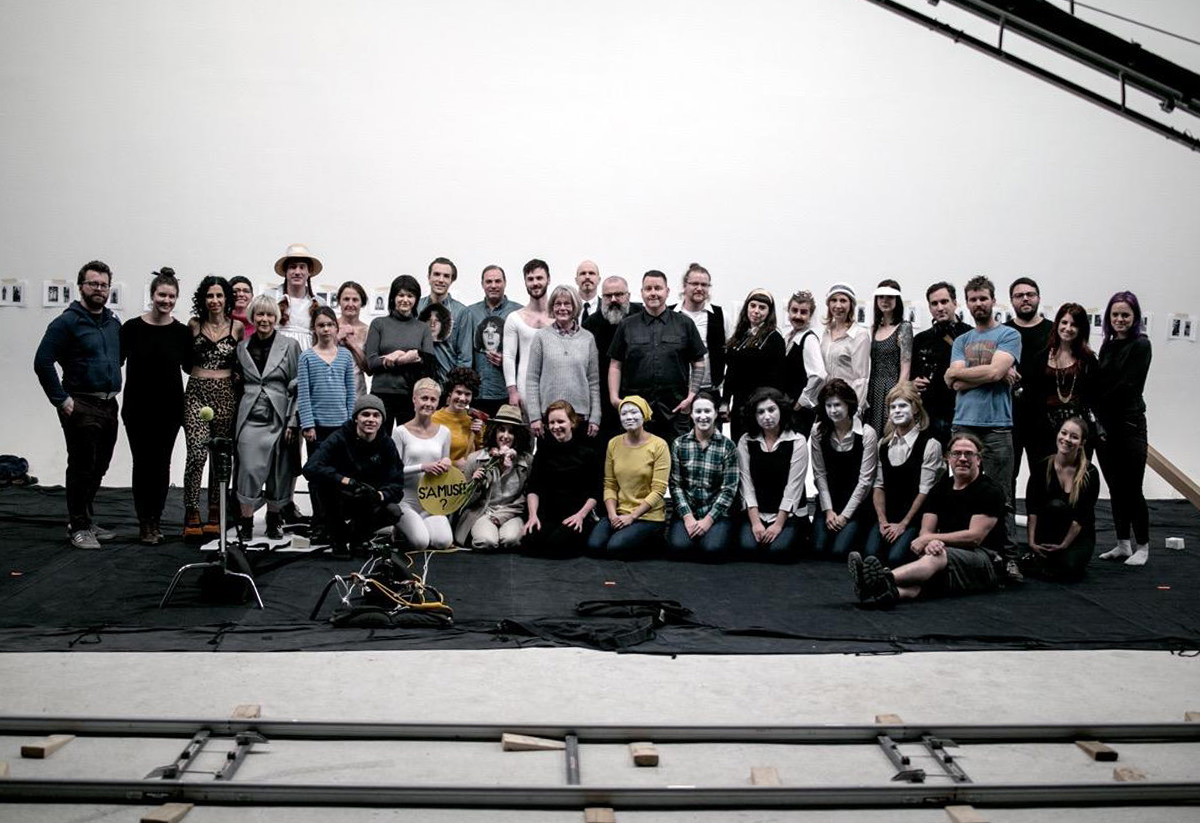 Behind the Lens: The Making of the Suzy Lake Video

What are you working on next that has you excited?

I’m working on developing two new film projects at the moment. Trace and Hame is the second film in an ongoing series of documentaries I’m making that examine subcultures related to resource-based industries found in rural Canadian communities. Inspired by Michel Brault and Gilles Groulx’s landmark 1958 film Les raquetteurs, the project examines the present-day agrarian culture, history and practice of draft-horse pulling in rural Southern Ontario. I’m also in the very preliminary development stages of an ambitious documentary project that examines the fraught past, present, and future of Northern and Arctic Architecture in Canada.