A Statistical Profile of Artists in Canada in 2016

(with Summary Information about Cultural Workers)

Partners: The Canada Council for the Arts, the Department of Canadian Heritage, and the Ontario Arts Council

The original report posted in Spring 2019 was retracted upon confirmation of the error of inclusion of artists and culture workers not in the labour force in May 2016 but who had worked since January 2015. This is the corrected report in which data on artist and culture workers have been re-stated.

This report focusses on the working lives of artists in Canada, and it is the 49th report in the Statistical Insights on the Arts (SIA) series from Hill Strategies Research. The full report includes details about:

The report also provides a brief summary of the situation of cultural workers in Canada (a broader grouping which includes but extends well beyond artists).

The report is based on a custom data request from the 2016 long-form census, which classifies people in the occupation in which they worked the most hours during the census reference week (May 1 to 7, 2016). Subsequent reports will examine artists in Canadian provinces and municipalities, as well as demographic differences in the situations of artists.

This report contains statistics on the working lives of artists and cultural workers analyzed from the 2016 long-form census. Readers should keep in mind that when the census was conducted in 2016, Canadians 15 and older were classified in the occupation in which they worked the most hours during the census reference week (May 1 to 7, 2016). If they did not work during that week, they were classified based on the job at which they worked the longest since January 1, 2015. If they did not work at all during that period, they were excluded from the experienced labour force (and the statistics in this report). The census collected income information for 2015, the most recent full calendar year.

It is also important to note that, due to major changes in methods between the 2011 National Household Survey and the 2016 census, data in this report are not comparable to previous reports.

Nine detailed occupation codes are included in the count of artists. From largest to smallest, they are:

The report contains other key findings related to the working lives of artists:

The median individual income of Canada’s artists is $24,300, or 44% less than all Canadian workers ($43,500). The main component of total income, for most workers, is employment income (including wages, salaries, and self-employment earnings). A typical artist has employment income of $17,300, a figure that is 56% lower than the median of all workers ($39,000). For the first time in 2016, household income statistics were requested from the census. A typical artist has a household income of $57,800, 33% lower than all workers ($86,500). 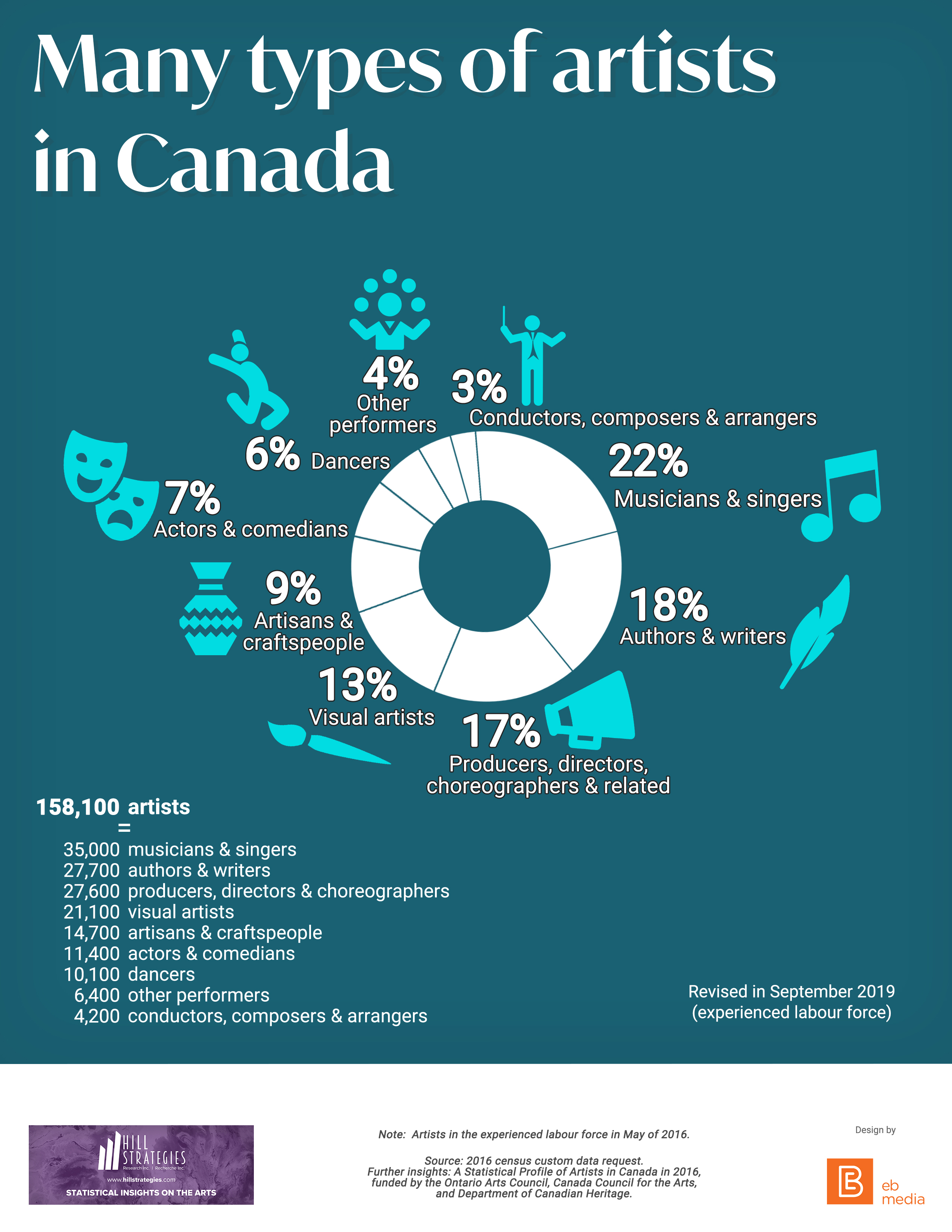 Description of the infographic: Many types of artists in Canada

Note: Artists who spent more time on their art than at any other occupation in May 2016.

Further insights: A Statistical Profile of Artists in Canada in 2016, funded by the Ontario Arts Council, Canada Council for the Arts, and Department of Canadian Heritage.

Statistical Insights on the Arts