Partners: The Canada Council for the Arts, the Department of Canadian Heritage, and the Ontario Arts Council

This report examines the influence of a wide range of demographic factors on arts participation rates, including education, family income, language, sex, age, and many others. It is the 48th report in the Statistical Insights on the Arts (SIA) series from Hill Strategies Research. The report also provides a rare intersectional analysis of arts participation by women and racialized Canadians.

The previous SIA report, Canadians’ Arts, Culture, and Heritage Participation in 2016, found that virtually all Canadians (15 or older) participated in some type of arts, culture, or heritage activity in 2016. The report recognized that this is a very broad indicator, including, for example, someone who read a newspaper, watched a movie, or listened to music at any point in 2016. This report focuses on demographic patterns in a smaller number of arts activities, including:

Patterns of higher attendance rates were found for many demographic groups, including women, youth, Canadians with high family income, and non-religious Canadians: 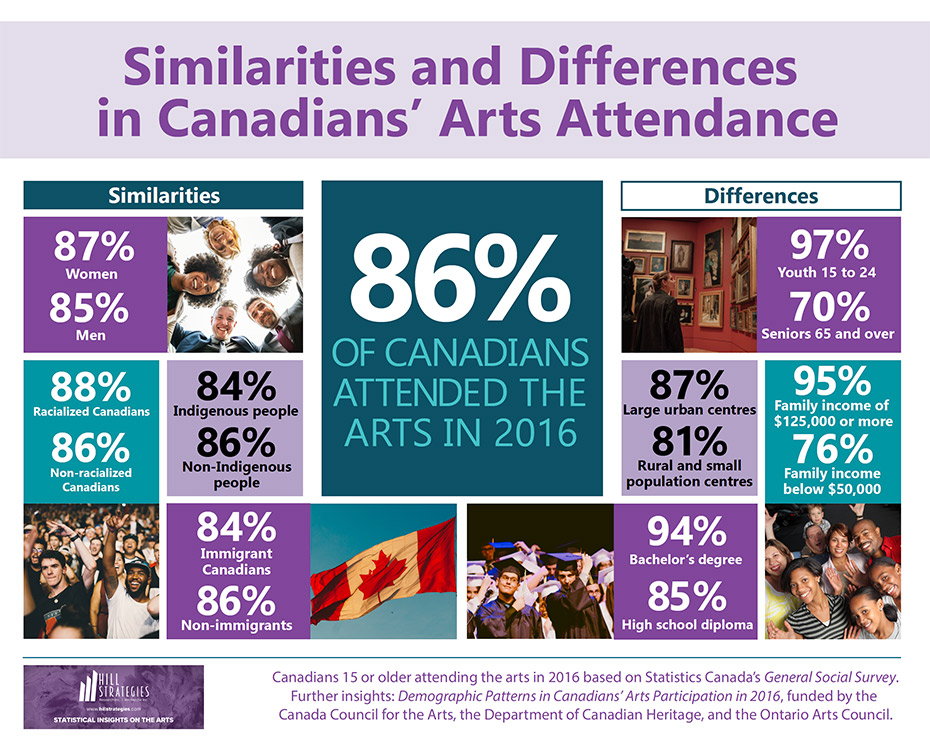 Description of the infographic: Similarities and Differences in Canadians’ Arts Attendance

Canadians 15 or older attended the arts in 2016, based on Statistics Canada’s General Social Survey. Further insights: Canadians’ Arts, Culture, and Heritage Participation in 2016, funded by the Canada Council for the Arts, the Department of Canadian Heritage, and the Ontario Arts Council.

Statistical Insights on the Arts