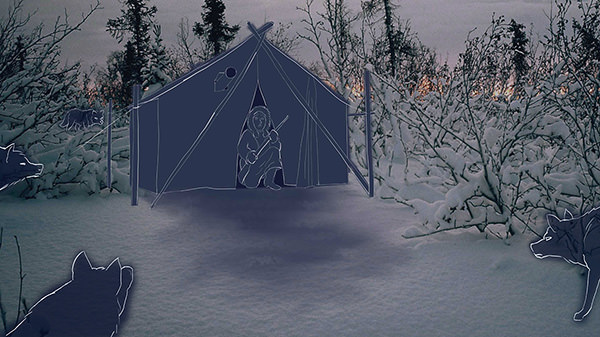 Still from short film Great-grandmother’s confrontation with a pack of wolves, one of the 20 films presented at the River Journeys project. Photo: Gwich’in Tribal Council, Department of Cultural Heritage

Teaching the lessons of the past for the future

The Gwich’in Tribal Council (GTC) Department of Cultural Heritage and the Fort Simpson Historical Society will mark the 100th anniversary of Treaty 11—the last of the Numbered Treaties between First Nations and the Canadian government—with the River Journeys exhibition. The show will include 20 short films featuring Dene elders who were present when the Treaty Party visited in 1921. A range of traditional artwork will also be presented. Support from the Canada Council for the Arts will help the GTC expand River Journeys with new works by four young Indigenous artists.

Two young Indigenous filmmakers will capture the art creation process, showing how ancient stories continue to inspire artists. The GTC hopes the contrast of traditional and modern works will encourage a young southern audience to see Dene history as they do: a triumphant survival of northern Indigenous communities through a century of unremitting challenges. River Journeys will be presented at the Fort Simpson Historical Centre, helping to establish a creative hub where young artists can pursue their work.