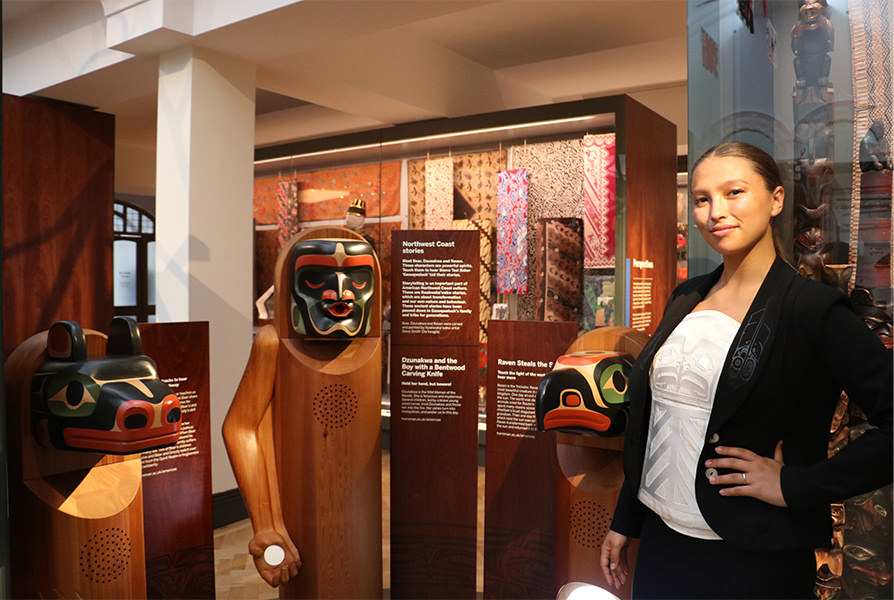 Sierra Tasi Baker standing in front of the three storytelling posts she worked on at the Horniman Museum and Gardens in London. The carvings are by Kwakwaka'wakw artist Steve Smith. Photo: Horniman Museum

A grant helped Sierra Tasi Baker, a Kwakwaka’wakw speaker and storyteller from North Vancouver, travel to the UK to debut a collaborative oral storytelling installation at the Horniman Museum.

Opening the World Gallery exhibit at the UK’s Horniman Museum

In 2018, Baker travelled to the Horniman Museum in London, UK, to attend the opening of an interactive art installation in the Pacific Northwest Coast Peoples’ section of the museum, which included three traditional Kwakwaka’wakw stories she recorded. Baker was also invited to deliver an opening speech alongside dignitaries and public figures. Additionally, she participated in media interviews and engagements with the British public and schools, which gave her the opportunity to challenge stereotypes, educate the public and further reconciliation narratives.

Reclaiming narratives in a positive and historically authentic way

Baker—whose Kwakwaka’wakw name is Gesuqwaluck, which means “creator” or “the creative one”—says the trip supported her work as a young heritage professional trying to bring First Nations oral histories into the museum space as a reconciliation practice. She succeeded in forging relationships with the British heritage sector and helped present Kwakwaka’wakw oral histories in an environment where they tend to be poorly understood.