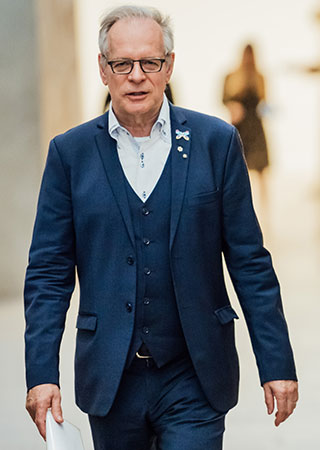 Ottawa, March 14, 2019 – The Canada Council for the Arts welcomes the news of Simon Brault’s election as Chair of the International Federation of Arts Councils and Culture Agencies (IFACCA).

The Director and CEO’s election was announced at the closing ceremony of the IFACCA’s 8th World Summit on Arts and Culture, which is taking place in Kuala Lumpur, Malaysia. Read the IFACCA announcement.

Simon Brault is the first Canadian and first Francophone to chair the IFACCA. As the first World Summit on Arts and Culture wrapped up in Ottawa in December 2000 with a decision to create the IFACCA, Shirley Thomson was elected as chair of the interim board of directors, which was charged with preparing the adoption of the organization’s constitution and electing its first board of directors, which it did in 2003.

Simon Brault is the author of No Culture, No Future. He is a visionary leader and a respected and sought-after speaker in Canada and abroad, particularly on topics around cultural development and the emergence of a new cultural diplomacy. Read Simon Brault's biography.

“It is a great privilege and an honour to assume the role of Chair of the International Federation of Arts Councils and Culture Agencies (IFACCA), a strategic network for which the Canada Council played a foundational role in 2000—and which it has since continued to support.

“In my role as Director and CEO of the Canada Council for the Arts, I have been deeply committed to the idea that the arts hold the power to renew cultural diplomacy and foster relationships that make it possible for peoples and nations to work together and build a shared future. We can unleash this power all the more strongly when we work together, above and beyond the borders of our respective countries. In my role as the IFACCA Chair, I look forward to deepening the impressive impact the arts can have on the global community.”

— Simon Brault, Director and CEO, Canada Council for the Arts, Chair of the International Federation of Arts Councils and Culture Agencies (IFACCA)

About the Canada Council for the Arts

The Canada Council for the Arts is Canada’s public arts funder, with a mandate to “foster and promote the study and enjoyment of, and the production of works in, the arts.” The Council promotes and financially supports artistic excellence by offering Canadian professional artists and artistic organizations a broad range of grants, services, prizes and payments. Its work ensures that excellent, vibrant and diverse art and literature engages Canadians, enriches their communities and reaches markets around the world. The Council also raises public awareness and appreciation of the arts through its communications, research and arts promotion activities. The Council operates the Canadian Commission for UNESCO, which promotes UNESCO’s values and programs in Canada, in order to contribute to a future of peace, equity and sustainable development. The Canada Council Art Bank operates art rental programs and helps further public engagement with contemporary arts.