Ottawa, ‪May 6, 2016 - The Canada Council Art Bank has acquired seven works by leading Indigenous artists in Canada. This is the first major acquisition by the Art Bank in over two years, and features emerging and established Indigenous artists. The pieces were selected following consultations with the members of the artistic community led by the Art Bank staff. The works – and their addition to the Art Bank collection speak to the Council's commitment to Indigenous arts and {Re}conciliation.

Barry Ace’s For King and Country (2015) utilizes cultural markers such as porcupine quills, deer hide and glass beads. The piece denounced the policies of the federal Indian Act which denied the vote to Indigenous people, many of whom fought overseas during the First and Second World Wars. To raise public awareness of this issue, For King and Country will be featured in the Canada Council for the Arts’ forthcoming exhibition Punctured Landscape which is on display in Âjagemô at 150 Elgin Street from May 12th to October 2nd, 2016. 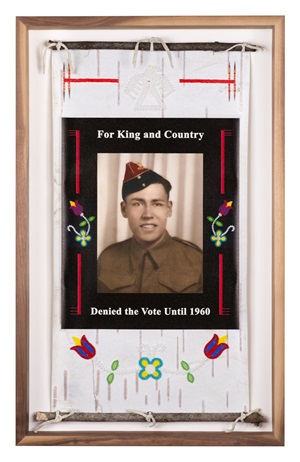 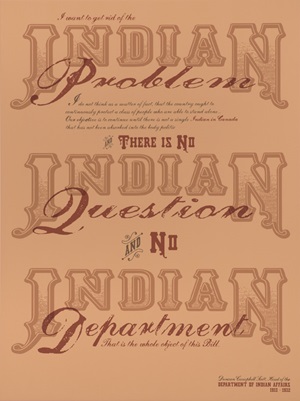 Sonny Assu’s archival pigment print on paper Selective History (2012) critiques the use of historically oppressive language by the Canadian government to proliferate the notion of the “Indian Problem.”

Jordan Bennett’s reproduction of a screen capture of a Canadian Google search engine in acrylic on canvas, Why Are Native Americans (2012) questions the legitimacy of information circulated about the Indigenous people of Canada in the digital age. 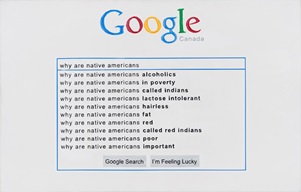 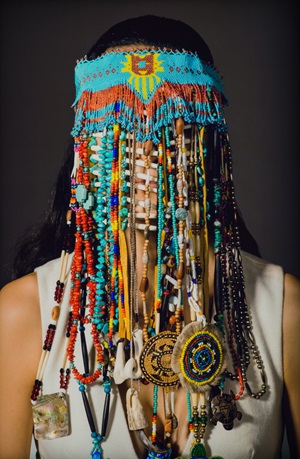 In Dana Claxton’s Headdress (2016), the Bead acts as a marker of Indigenous identity to be celebrated, but its commodification, reconsidered.

Amy Malbeuf’s The Mealy Mountains and Three Artists Fly North (2013) harness beadwork as a central means of exploring identity. For Malbeuf, the intention is to translate abstract expressionist techniques to bead work. 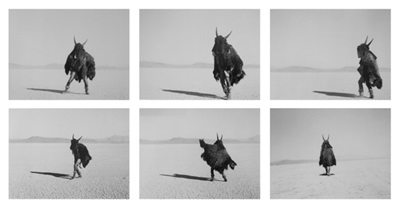 Adrian Stimson’s series of six digital photographs The Shaman Exterminator Playing on the Playa brings to life the duality between stereotypes and realities of “Indian” identity. The series, originally printed in 2009/10 for an exhibition at the Canadian Cultural Centre in Paris, France, showcases a new, playful side of Stimson’s performance character: The Shaman Exterminator.

(Photo: courtesy of the artist)

With themes ranging from current impressions of Indigenous people as told through Google search algorithms; to the appropriation and re-appropriation of cultural symbols; to military service while denied the right to vote, these works were selected for the timely and critical nature as we collectively move towards reconciliation. We are delighted these pieces will be part of the Art Bank’s collection and made available to Canadians through our rental and outreach programs as well as our website.

The Canada Council Art Bank, with approximately 17,500 works, has the largest collection of contemporary Canadian art in the world. It was created to support the efforts of Canadian visual artists and to provide government and corporate offices with the opportunity to rent Canadian art for their offices and public spaces. Since 2001, the Canada Council Art Bank has acquired close to 900 works through its purchase program. Currently, one third of the collection is on rental and displayed in office and public spaces, giving Canadians across the country access to a variety of works by Canadian artists.