The Canada Council for the Arts is proud to announce that Architects Against Housing Alienation (AAHA) will represent Canada in the 18th International Architecture Exhibition – La Biennale di Venezia, from May 20 to November 26, 2023. 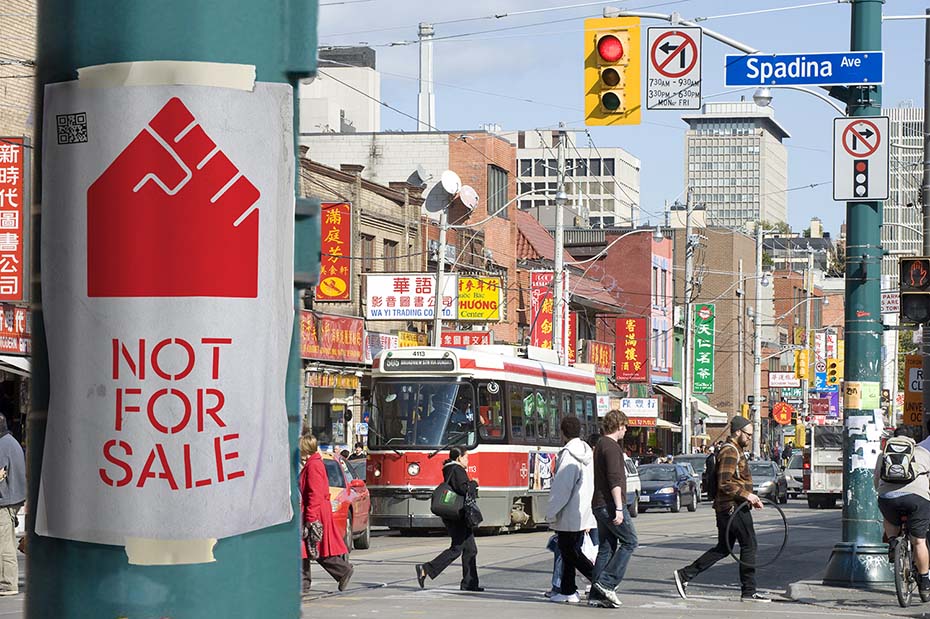 With this distinction, Architects Against Housing Alienation (AAHA) will launch Not for Sale! an architectural activist campaign for non-alienated housing.

Canada is in the midst of a severe and protracted housing crisis, with issues ranging from widespread unaffordability to under-housing, precarious housing, and homelessness. This modern reality, shaped by the extractive logic of speculative real estate, is founded on the simultaneous colonial dispossession of Indigenous lands and the modern invention of fee-simple property. Real estate speculation is a form of extortion. It converts homes into spatio-financial assets, changing the form, function, and aesthetics of housing to better serve the logics of wealth storage and speculation. The process is violent, resulting in an urban environment that is racist, sexist, and classist at a systemic level. This global phenomenon is nowhere more visible than in Canada, a country whose economy is now dominated by real estate. 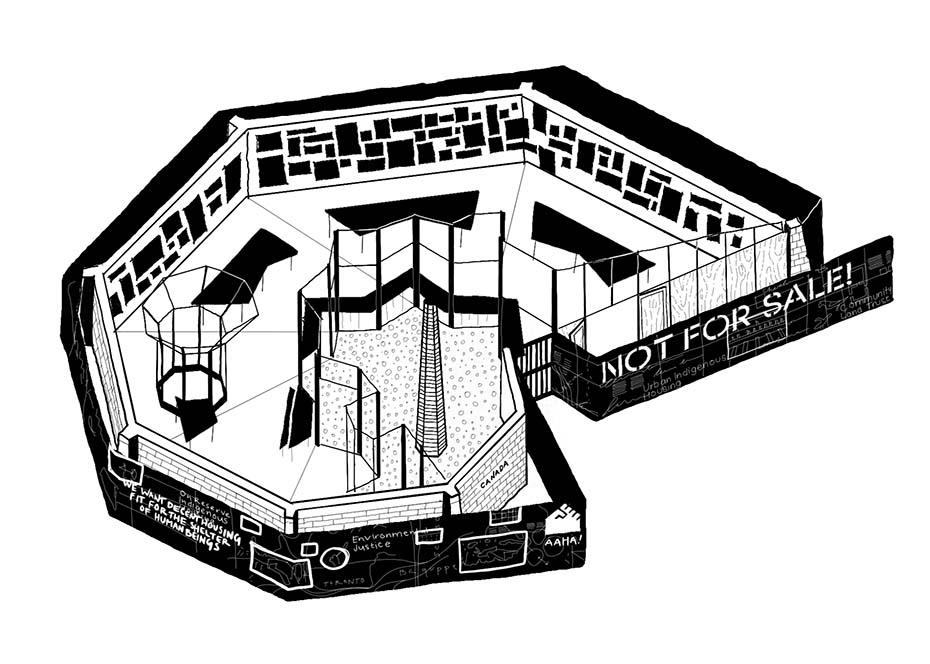 Architects Against Housing Alienation (AAHA) will transform the Canada Pavilion in the Giardini into a campaign headquarters for equitable housing that rejects this concept of property and the financialized form of architecture that it implies. To address these issues, they will work with interdisciplinary and geographically dispersed teams comprised of activist organizations, advocates for non-alienated housing, and architects. They will collaborate to develop demands and create architectural projects to address housing alienation, presenting bold visions for equitable and deeply affordable housing in Canada. The AAHA goal is to mobilize all Canadians to join the call for safer, healthier, and more equitable housing.

“We are thrilled to have been selected to represent Canada at the 18th International Architecture Exhibition, a prestigious international platform that engages critical conversation about contemporary architecture. It is crucial that we respond to Canada’s deep housing crisis. Together with Indigenous leaders, activists, advocates, and architects, we will create a campaign for accessible and affordable housing for all.” — Architects Against Housing Alienation (AAHA)

“On behalf of the Canada Council for the Arts, my congratulations to Architects Against Housing Alienation (AAHA) and their collaborators. Their proposed Not for Sale! campaign is both unique and timely. It is certain to resonate internationally, as Canada, like much of the world, grapples with the complex and widespread challenges of housing affordability and availability. We look forward to discovering how AAHA will evolve and incorporate their concept into the Canada Pavilion as part of the 2023 Venice Biennale of Architecture. The Canada Council—as Commissioner of this exhibition—is pleased to enable big arts ideas that influence social change to reach new audiences.” — Simon Brault - Director & CEO, Canada Council for the Arts

Architects Against Housing Alienation (AAHA) is a curatorial collective, newly formed for the Venice Biennale of Architecture. It has a mission to instigate an architectural movement and create socially, ecologically, and creatively empowering housing for all. 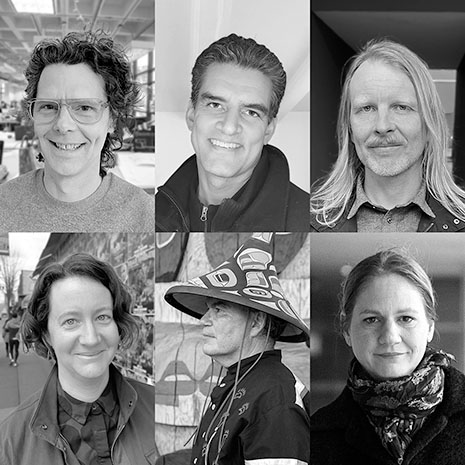 Adrian Blackwell, David Fortin, Matthew Soules, Sara Stevens, Patrick Stewart, Tijana Vujosevic
Adrian Blackwell is an artist, designer, theorist, and educator, whose work explores the relationship between physical spaces and political economic forces. His art and design have been exhibited across Canada, in the United States, and internationally at the Shenzhen and Chengdu Biennales, Shanghai Urban Space Art Season, the Chicago Architecture Biennial and the Toronto Biennial of Art. In 2022 Adrian and David Fortin co-edited issue 12/13 of the journal Scapegoat–c\a\n\a\d\a: delineating nation state capitalism. He has taught architecture and urbanism at Chongqing, Michigan, Toronto, and Harvard Universities and is currently an associate professor at the University of Waterloo School of Architecture.

David Fortin is a citizen of the Métis Nation of Ontario and a member of the Royal Architectural Institute of Canada (RAIC) Indigenous Task Force that seeks ‘ways to foster and promote indigenous design in Canada’. From 2018–2019, he coordinated a community-led housing design project with the National Research Council for remote northern communities and has also participated as a mentor and architect for the Indigenous Homes Innovation Initiative administered by Indigenous Services Canada. David is a professional architect who runs a small architectural office working primarily with Métis and First Nations communities across Canada. He is currently a professor at the University of Waterloo School of Architecture.

Matthew Soules is an associate professor at the University of British Columbia School of Architecture and Landscape Architecture and the founder of Matthew Soules Architecture. Matthew’s research focuses on contemporary capitalism and architecture. His latest book, Icebergs, Zombies, and the Ultra Thin: Architecture and Capitalism in the Twenty-First Century, examines the rise of finance capitalism and its relationship with architecture. Matthew’s work has been funded by numerous organizations, including the Social Sciences and Humanities Research Council and the British Columbia Arts Council, as well as receiving a wide range of awards, such as the AIA/ACSA Housing Design Education Award in 2012. He has been visiting faculty at Harvard University and SCI-Arc.

Sara Stevens is an architectural and urban historian. She is an associate professor at the University of British Columbia School of Architecture and Landscape Architecture. Her research focuses on real estate developers of the twentieth century, exploring the cultural economy of architectural practice, finance, and expertise in Canada and the United States. Her book, Developing Expertise: Architecture and Real Estate in Metropolitan, studies real estate development in twentieth century American cities, and how developers, investors, and architects worked together to build subdivisions and superblocks, cul-de-sacs, and towers. Sara was awarded a 2019 Research Fellowship with the Canadian Centre for Architecture that supports her second book project, titled Building Capital.

Patrick Stewart is a member of the Killerwhale House of Daaxan of the Nisga’a Nation. He is an award-winning architect with 26 years of architectural experience. Patrick was the first architect of First Nations ancestry to own and operate an architectural firm in British Columbia and elected as President of the Architectural Institute of British Columbia. Patrick is founding Chair of the Royal Architectural Institute of Canada Indigenous Task Force, Co-Chair of the RAIC Truth and Reconciliation Task Force and Chair of the Provincial Aboriginal Homelessness Committee in BC. He has also been a mentor for the Indigenous Homes Innovation Initiative administered by Indigenous Services Canada as a different way to develop, design and fund projects with Indigenous communities.

Tijana Vujosevic is assistant professor at the University of British Columbia School of Architecture and Landscape Architecture. Tijana is the recipient of numerous grants and awards, including the MIT Presidential Fellowship, Gerda Henkel Foundation PhD Fellowship, American Association of University Women International Fellowship, and, more recently, a two-year Fellowship with the Institute of Advanced Studies at the University of Strasbourg. Recently, MOMA re-published her 2013 essay on Soviet 1930s bathhouses on its site as essential reading during the pandemic. Tijana’s book on communist domesticity was reviewed in nine scholarly journals and was on Owen Hatherley’s list of most important books of 2017 in the Architectural Review.

Chris Lee is a graphic designer and assistant professor in the Undergraduate Communications Design Department at the Pratt Institute (Brooklyn, NY). His research and independent creative work explore the historical, practical, and pedagogical implications of centering the document—in particular its archival, evidentiary function—as a genre of graphic design. He has worked for The Walrus Magazine, Metahaven, and Bruce Mau Design.

Ali S. Qadeer is a Toronto-based designer, educator in the faculty of OCADU, an occasional writer, and a graduate of McGill University and RISD. His work and writing focus on algorithmic form-making, unorthodox toolmaking, and the disciplinary and economic structures that design practices buttress, as well as surveillance and platform managerialism and the countercultures of cooperativism.

Along with the selected project, the proposals from the following firms and collaborations made the 2023 Venice Biennale of Architecture shortlist:

Pre-Occupied Architectures / Prerequisites looks at how buildings meet their ground as a shared space with a deep history—one that is collective, social, economic and geopolitical. How can we reformulate the spatial and cultural conditions of listening? Such questions are pressing in architecture schools and are addressed—albeit partially—in exemplary architecture projects throughout Canada.

Chevalier Morales Collaborative is a research unit in search of new operating models, collaborative strategies and listening tools in the field of architecture. For the Biennale, the unit would integrate four academics from four different universities in three different provinces, who are specialized in the fields of Indigenous studies, architecture, sustainable design, critical practices and architectural mediations.

-Post- speculates on a series of narratives in Canadian architecture, reflecting on past and future relationships, and the material stories that underpin them. The Canadian Pavilion will be transformed through a set of installations into an experiential, global event space where guests will be invited to consider: “how can we ask better questions through the stories we tell?”

-Post- measures, positions, supports and takes stock, by placing visitors in relation to space, history, time and identity. The pavilion, itself a communication post, becomes an architectural prompt and provocation to investigate the multiplicity of Canada’s past, present and future stories.

Towards a Vernacular of Resilience

The scale and interconnectedness of our global economy and its profit driven nature has fundamentally altered the world. In the Canadian context, this is manifest in sites of resource exploitation where the demand for a maximized return on investment supersedes all other dimensions of community building.

Working at the scale of ‘single resource communities’, Towards a Vernacular of Resilience focuses on decoupling economic practices from global dependencies while recuperating silenced voices to forge authentic and resilient relations between economic processes and local social, cultural, and ecological practices.

The project conceptually reinvests in material, spatial and tectonic practices towards realizing a more socially-resilient, culturally-relevant, and ecologically-contributive future.

marc boutin architectural collaborative (MBAC) is an interdisciplinary design studio that explores interventions in contexts that are multi-scalar in nature with a process that is collaborative in practice. The work of the firm is characterized by the synergies that emerge in the co-consideration of architecture, urban design, industrial design and art-making.

About the Venice Biennale of Architecture

The Venice Biennale is, and has been, one of the most important cultural institutions in the world for over 120 years. The International Architecture Exhibition consists of a central exhibition with over 100 international participants, 60 national pavilions, and collateral events throughout the city. It is a prestigious exhibition and international platform that engages critical conversations about contemporary architecture that attracts 300,000 visitors annually - among them architects, artists, designers, critics, politicians, students, and cultural leaders from around the world.

About the Commissioner, the Canada Council for the Arts

The Canada Council for the Arts is Canada’s public arts funder, with a mandate to foster and promote the study and enjoyment of, and the production of works in, the arts. The Council champions and invests in artistic excellence through a broad range of grants, services, prizes and payments to professional Canadian artists and arts organizations. Its work ensures that excellent, vibrant and diverse art and literature engages Canadians, enriches their communities and reaches markets around the world. The Council also raises public awareness and appreciation of the arts through its communications, research and arts promotion activities.

The Canada Council has proudly supported Canada’s representation at the Venice Biennale for many years. Continuing its commitment to enhance the presence and profile of Canadian artists and arts professionals abroad, the Canada Council, as Commissioner, oversees Canada’s official participation and contributes $500,000 towards the exhibition production.


The selection committee for the 2023 Venice Biennale of Architecture is comprised of the following members: