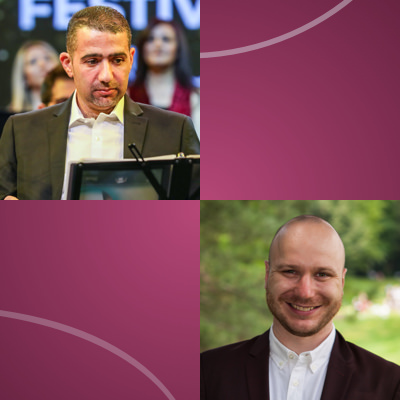 Born in Jerusalem, Wafa Al Zaghal grew up to the sounds of classical Arabic music played by his father who was passionate about it. He is a professional Qanun player, an Arabic string instrument he studied at the Edward Said National Conservatory of Music and later became a music instructor and the Academic Director of the Conservatory. He moved to Canada in 2013 and co-founded the Canadian Arabic Orchestra (CAO) and the Canadian Arabic Conservatory of Music with his wife Lamees Audeh. He is working on releasing his first album of original music compositions and is pursuing a Master’s degree.

As the President and Founder of the Festival of Arabic Music and Arts, Wafa’s goals are to build a creative space for the Arab community in Canada, to help preserve classical and folk Arabic music and to build bridges of intercultural understanding though a Masters in Community Music (MA) from Wilfred Laurier University.

Xavier Roy is the executive director of the Festival de Lanaudière, the largest classical music festival in Canada. After having performed hundreds of concerts with the group QW4RTZ, he specialized in business intelligence and marketing, namely at the Place des Arts and the Opéra de Montréal. Certain that the cultural sector is a tool for economic and social development, he sits on numerous boards of directors and government committees. Xavier Roy is a recent graduate of the Oxford University MBA program and the first Saïd Business School/HEC Montréal Fellow.

Xavier who is the Executive Director of the Festival de Lanaudière, will be mentored under Janice Price, President and CEO of the Banff Centre for Arts and Creativity. His project will address finding a balance between local and international priorities for large arts institutions in smaller urban or rural areas.

These prizes were established with a $1 million donation from the Samuel and Saidye Bronfman Family Foundation to the Canada Council for the Arts. John Hobday made an enormous contribution to improving the work quality and professionalism of Canadian arts managers by promoting professional development and continuous training and focusing on the profession's importance for the growth and viability of the arts.

Note that the updated guidelines will be posted two months prior to the deadline. Submit an application by email to johnhobday-prizes@canadacouncil.ca.