Ottawa, August 3, 2016 – Cellist Daniel Hass is the recipient of the 2016 Canada Council Michael Measures Prize. A unique collaboration between the Canada Council for the Arts and the NYO Canada (National Youth Orchestra of Canada), this $25,000 prize recognizes promising talent in the next generation of Canadian classical musicians.

The prize is named after Michael Measures, a music enthusiast and long-time volunteer in the Ottawa arts community. At his death, Measures left a generous bequest to the Canada Council for the Arts to provide development opportunities for young classical musicians and to encourage public recognition of their achievements. 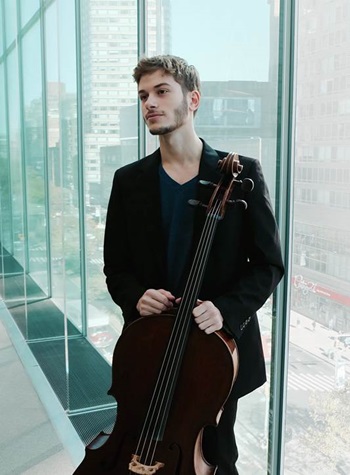 As a newly settled Canadian, winning the Michael Measures Prize has been an incomparable and truly emotional honour. Having studied in Toronto with NYO faculty cellist David Hetherington and collaborated with NYO alums, it was always an aspiration of mine to become a part of this national community of musicians. The Michael Measures Prize is the cherry on top, and a huge one.

The Canada Council is committed to young, emerging artists and to connecting them with new audiences. The Michael Measures prize recognizes Daniel Hass as a ‘name to watch’ and through the NYO’s concerts we’re delighted to share his talent with Canadians from coast-to-coast.

Tara Lapointe, Director of Outreach and Business Development, Canada Council for the Arts

The prize will be presented during a NYO Canada concert in Toronto at Koerner Hall at 7:30 pm on August 11, 2016.

NYO Canada is Canada’s pre-eminent orchestral training institute for musicians aged 16 to 28. Its mission is to educate, elevate and empower Canada’s most gifted young orchestral musicians. Internationally recognized as one of the finest orchestral programs in the world, NYO Canada provides the most in-depth comprehensive training and touring experience under the guidance of a world class conductor and faculty. More than 500 aspiring high school and university-level student musicians audition for the 80 to 100 spots in the NYOC each year. Since its inception in 1960, more than 3,200 of Canada’s finest young musicians have received orchestral training. Its alumni form the core of major Canadian orchestras while others have gone on to become members of prominent international orchestras.

The Canada Council for the Arts is Canada’s national public arts funder. We champion and invest in artistic excellence so that Canadians may enjoy and participate in a rich cultural life. In 2014-15 we allocated $155.1 million dollars towards artistic creation and innovation through our grants, prizes and payments. We also conduct research, convene activities and work with partners to advance the sector and help embed the arts more deeply in communities across the country. We are responsible for the Canadian Commission for UNESCO which promotes the values and programs of UNESCO to contribute to a more peaceful, equitable and sustainable future for Canadians. The Canada Council Art Bank operates art rental programs and helps further public engagement with contemporary arts.