Now that the exhibition has been up for a while, and having had some time to reflect, I find myself thinking about all that went on behind the scenes that made the show possible. Because Thunderstruck’s focus is on dance, and because my background is in dance, I like to think of “behind the scenes” as a “back stage” of sorts. I have always been fascinated by what happens behind the curtain, and have used this interest as a lens in my own dance and film practice. Every exhibition, show, dance (and even every day) has its own untold details and stories. Aspects that are private, hidden, unknown, edited. For Thunderstruck: Physical Landscapes, I want to share a few stories that might otherwise only be known by the few of us who worked closely on the exhibition. Little in-between movements and moments that struck me.

Try not to cry on the art

As it was being installed, I almost couldn’t look at the many small, monochromatic, shrunken sweaters of the work titled Close Knit by Aganetha Dyck without my eyes welling with tears. The vulnerability of each individual sweater, contrasted with the collective support of the group, really moved me. One of the Art Bank’s technicians, Steven Allen, also said it was moving for him as he worked with each sweater, one by one. Each item has its own character, history, style, and presence. Each seemed singular, significant, and tender. The work has a kind of sadness to it: these are empty tiny sweaters…whose are they? Where have they gone? Yet there is also something incredibly hopeful in the work. I thought of this work as the spine of the exhibition. It reflects the idea of members of the dance community (or any community for that matter), leaning on each other, holding each other up, without much fuss, just power and strength and togetherness in the doing. The artist’s installation instructions don’t specify where each sweater should go, so the installer and curator are left with the lovely job of deciding which leans against which (or who leans upon whom). Steven did this with great care, sweater by sweater, as I looked on, trying not to cry on the art. 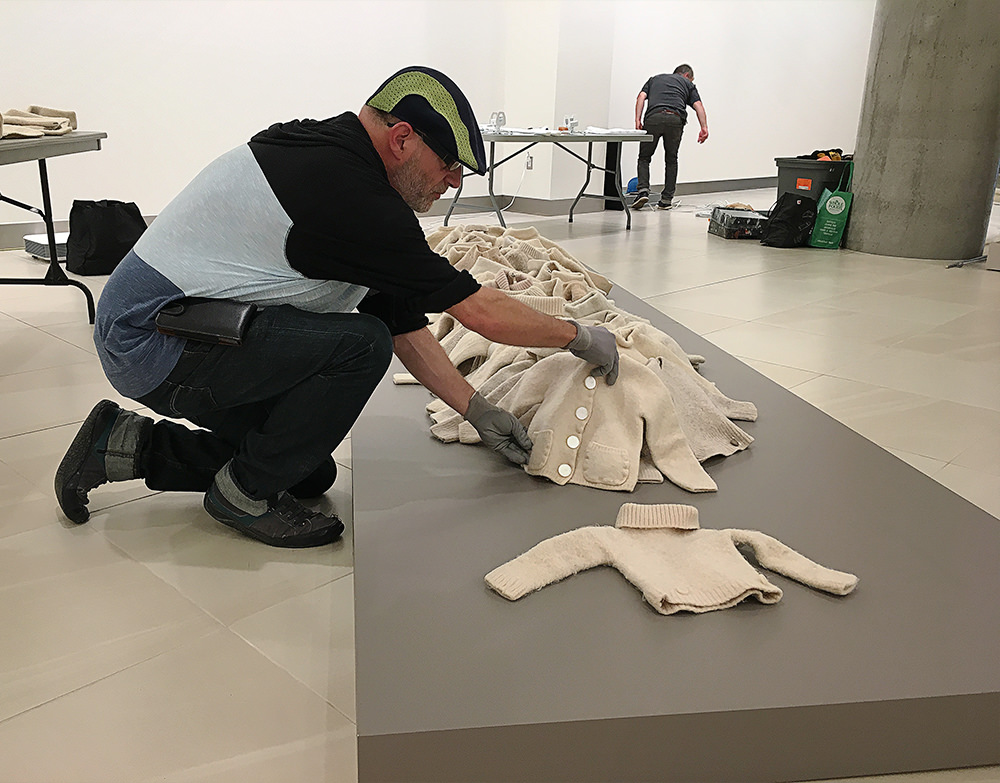 The life is in the living

I had been a fan of Angela Miracle Gladue for some time after seeing her perform with A Tribe Called Red, hearing about her from other artists, and digging her online presence as a dancer, educator, bead artist, and new mother. In this exhibition, Angela shows one of her Fancy Dance shawls and a new beaded medallion boom box, combining her skills and craft from her First Nations and hip hop cultures. These are items to be worn, and the dirt accumulated from Angela dancing outdoors can be seen on the bottom of the fringes of the shawl. Technicians and staff knew that to clean the shawl would diminish its authenticity. It is perfect as is. The life is in the living. I didn’t say much about how to display these works except that they needed to look alive. Conservator Christopher McKay created a system to hang the shawl and boom box that was an artwork unto itself. He softened pliable wood and fashioned it into shoulders to hold and form the clothing. He also provided options so it could move a little, countering the potential stasis a gallery can impose on an art work. 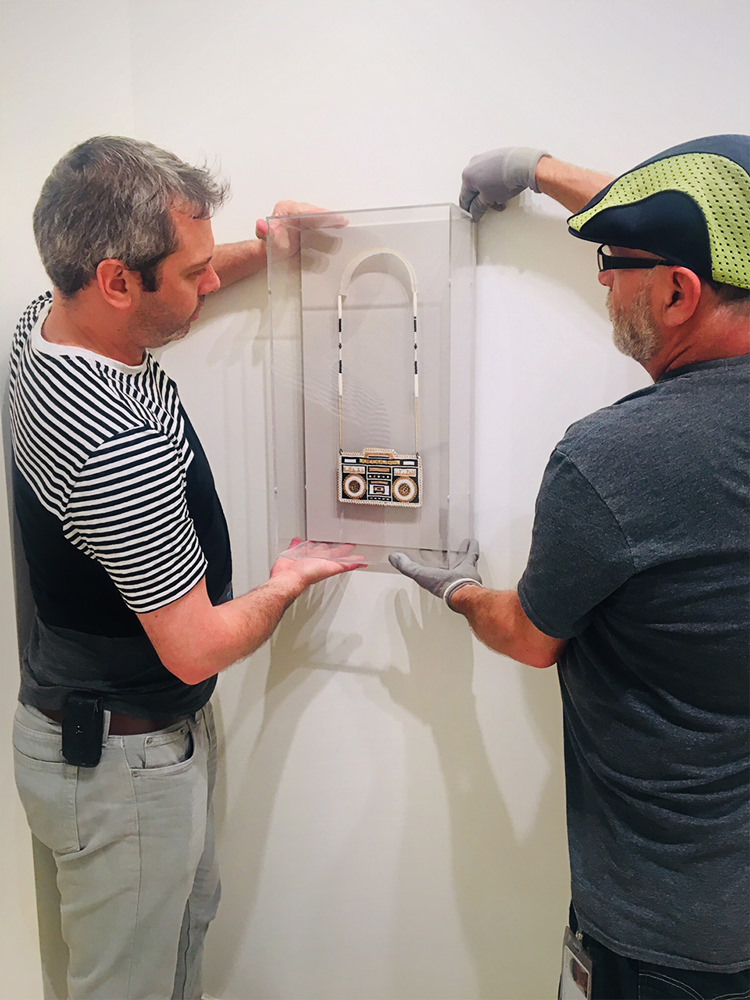 A touch of ceremony

The didactic text panel for Melting, Mourning and a Series of Impossible Tasks, choreographed by Brandy Leary and performed by Ess Hoedlmoser, was mounted right after the opening night performance was over, and not a moment sooner. It had to be done then, because the piece didn’t “exist” before it was performed. It was a wonderful ceremonial moment as the panel was placed on the wall, a nice touch by Mike Steinhauer (Manager of Exhibitions and Outreach) and Steven Allen. 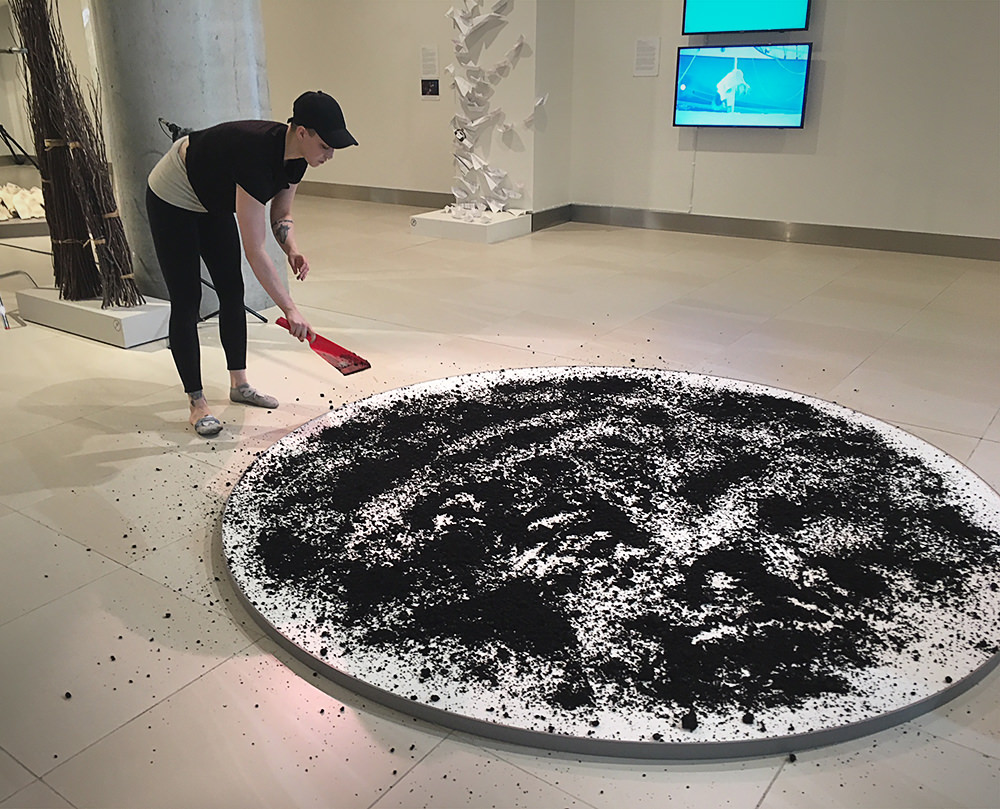 The quest for pure dirt

It was an honour to watch Ess Hoedlmoser’s performance, and the earth on the platform remains today in the shapes and forms created that night (although a message of love was recently found written in the dirt prompting the addition of a Do Not Touch sign…but we love you too). In the lead-up to this performance, we had had many discussions about the earth to be used, its composition, its origin, its effect on the performer, etc. If you buy earth from a garden centre, does it contain chemicals, manure, bacteria, worms? Would this harm the performer? Would it smell? Where is the significance in sourcing the soil this way? Could we get enough dirt from various sites around Ottawa that may have more meaning? Nancy Smith (Exhibitions and Outreach Assistant) went to a trusted local nursery, and the dirt arrived the next day in a plastic bin—pure, and ready for action. It was our intention to bring the land inside the institution, and have the institution respond to the land. Thus, in preparation for the performance, Ess and I ceremoniously covered the platform with the soil, also adding earth from vials Mike Steinhauer had thoughtfully filled at significant locations around Ottawa and Gatineau, balancing the needs and importance of meaning and logistics. 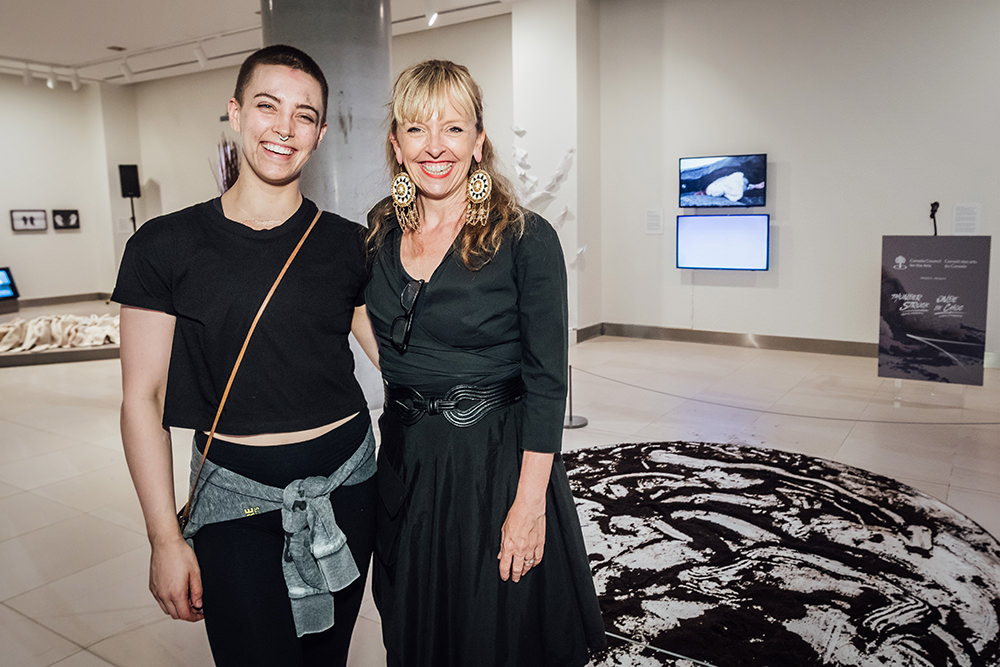 What’s in a date?

We also had numerous conversations about whether the date of birth of the artists should be included on the exhibit labels. Why do we care? Is this an outdated or colonial practice? Tedd Robinson (dance artist and Zen monk, who contributed balancing excerpted, 2012 to the exhibit) said it well: “I don't think I mind my date of birth being on there, although I think the practice is irrelevant, unless one is dead [...] The body/mind is old Jenn […] I am not sure it really matters if one is practicing, as they say, in the moment, then there is no time, no age.” Filmmaker Michelle Latimer—whose work Nimmikaage: She Dances for People, 2015, is also exhibited—astutely noted: “I have always declined having my birth date included with my gallery work. But you’re welcome to list my nation: Algonquin/Métis.”

La calq, an anonymous artist collective, provided The Names of Dancers, 2018 for the Thunderstruck exhibition. In my search for—and eventual conversations with—representatives of the group, I came to the realisation that I actually knew them (though I will never reveal their identities!). I love seeing dance artists visit the exhibition and get excited to see their own name projected on the wall; a nod and living memorial to the many, many dance artists across the country.

Finding care in the details

While I was doing the research for this exhibition, it was Shary Boyle’s The Widow that was the initial spark of inspiration for what was to follow. The work depicts an Atlas-like character, holding the weight of the world on their back. It struck me as an image related to the necessities and burdens of care. We have a lot to care for. The tangible and intangible. On stage and off stage. So much of the exhibition’s work lies in the unseen details, which come together to ensure there is interaction between the works, the land, the space, and the community. I really respect and appreciate the designers, technicians, installers, producers and administrators—who are artists in their own right. With the deep sensitivity they bring to their craft, they skilfully reined in both the material and ephemeral aspects of dance, creating a lasting display of collaboration and care. 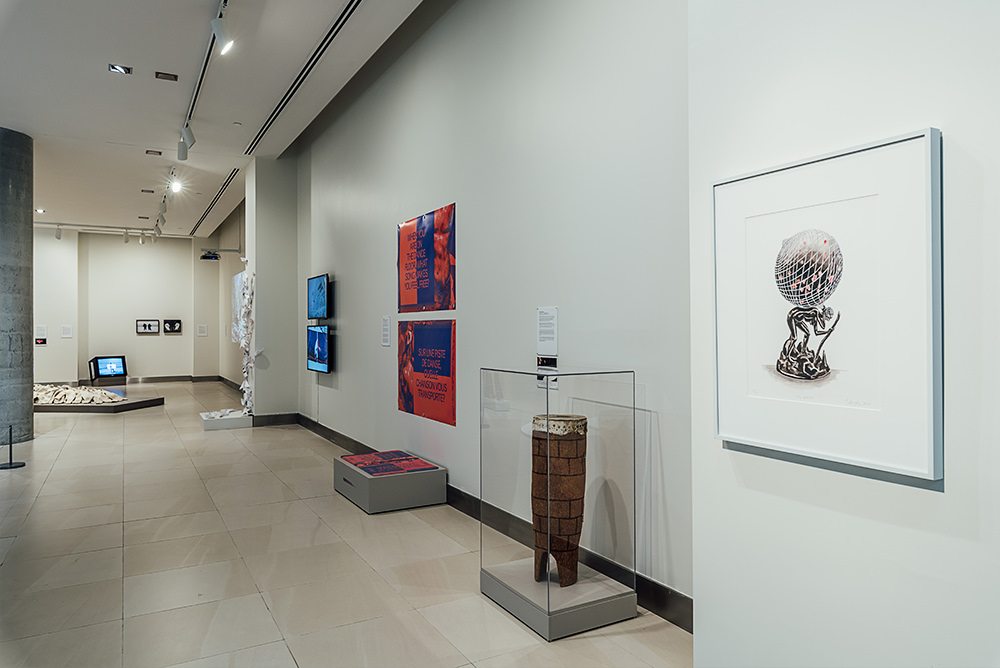 Installation view with Shary Boyle’s The Widow, 2013, seen on the right