A Tattoo Revival for the Nisga’a Nation 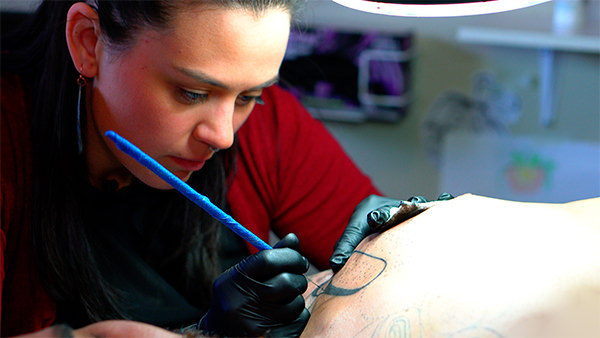 Nakkita Trimble has been working on tattoo revival for the Nisga’a Nation since 2013. With a Canada Council grant, she hopes to create 80 House crest tattoos.

Trimble, whose Nisga’a name is Speaking Through Art, began practising tattoo art in 2014 using traditional methods like hand-poking and skin-stitching. She is deeply involved in reviving ceremonial tattooing, which she views as medicine in the face of high suicide rates among Indigenous youth. The designs are maternal and connected back through generations according to a crest system, binding tattoo recipients to their mothers’ ancestors and linking them to creation stories.

Connecting youth to their identities

Nisga’a traditional tattoos have been passed down through generations and appear on regalia and jewellery. For Nisga’a people, the tattoos communicate identity, origins, family connections, and more. One of Trimble’s goals is to have younger generations learn their identity and stories from the older generations for the purposes of getting tattoos. Ultimately, she aims to hand-poke 80 ten-hour House crest tattoos from 2020 to 2022 and film a documentary about the process to share with Nisga’a and Canadian audiences.